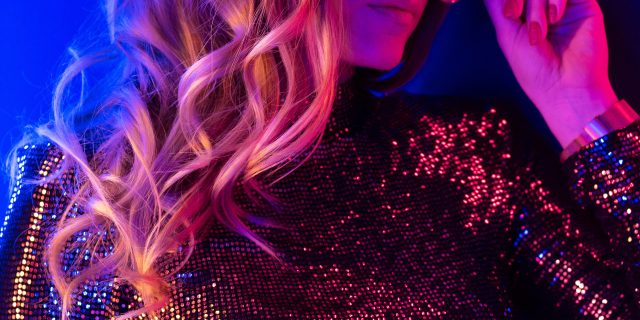 The minute the blindfold slipped over my eyes, my heartbeat accelerated three folds.

I was plunged into darkness and the reality of what I was about to do slammed into me.

Oh, God. Panic instantly worked its way up. What am I doing?

As I heard the footsteps of the attendants leaving the room, I suppressed the urge to call out for help and call a halt to this madness once and for all.

“You can pull out at any time,” said Sinclair, the elusive, ridiculously handsome owner of Club Seduction. He’d scanned the room full of nervous participants, but for some reason, his eyes fell on me when he continued. “Once you say your safeword, the scene ends. You also have a nonverbal code if you currently can’t speak. Do you all remember it?

I nodded, trying to suppress the shiver his dark gaze elicited. My nonverbal sign was currently three taps on my right side, and I knew that I could remember that. There were cameras in every room, with attendants watching in case anything went out of hand. And, as the reviews noted, in the ten years since Sinclair had been running these events, there had not been one incident in which a participant’s safety was jeopardized.

So there was no reason for me to be afraid.

Maybe it was because I was naked and spread-eagled across the bed with barely any room to move and nowhere to escape. My arms and legs were secured to the bedpost with fluffy handcuffs. I was utterly defenseless.

But isn’t that why you’re here? To taste a little defenselessness, a little danger?

To give up control completely.

I heard the door shut and there was nothing but silence for a little bit. I felt the anticipation build until it was like a loud pounding in my ears. Desire also prickled over my skin. The room was the perfect temperature, not too cold, just enough to feel a cool breeze here and there. My nipples puckered as I waited. There was also a tingling in my clit.

The door opened again, and I caught my breath.

Someone was walking in.

More than one pair of footsteps were moving towards me and my heart tensed. Oh, God. Two people were going to touch me?

On the form, I had marked a menage as something I’d be willing to try but I didn’t think that would be happening today. Wasn’t I supposed to try out the kiddie pool before swimming with the sharks?

I heard a low whistle. “Damn. I told you she was stacked underneath all those sweaters she always wears. Look at those gorgeous tits.”

“Shut up,” Another voice said, and it sounded way more serious than the first man’s jovial tone. “She can hear you moron.”

“Yeah, I know.” The first guy leaned over, and I could feel the trail of his cotton shirt skim over my nipples, making me squirm ever so slightly. He smelled like sunshine and leather, his breath minty as he whispered. “Your nipples are gorgeous, pink and plucked like little cherries. You ready for us, baby?”

Lust swam through me, the naughty words almost like a caress on my skin.

His voice sounded familiar, but I couldn’t register it as one of his hands pressed against my stomach, hot and heavy.

I gasped at his touch.

“Yes.” I gasped. I’d wanted this for so long, dreamt of it until my imagination could no longer satisfy me. And now that I had sought out the real thing, this man with a smoky voice was turning me on even more.

It was even better than I imagined.

“You have only one rule for this session.” The other man’s voice came again, and it sounded sterner, more in control. He sounded familiar too.

Sinclair, my mind threw out, but I rejected it. It was well known that the owner of the club didn’t participate in these events anymore. Even if he still did, there was no way he would do with little old me.

“The rule is to not move.” Not-Sinclair asked again. “Do you understand?”

I barely nodded, before I felt a rough hand brush across my nipples, causing me to tremble. The nipple was then pressed between two thick fingers and I squirmed instinctively, my core growing wetter.

A hand spanked me, right over the clit and I screamed.

“Yes, sir,” I muttered but my nerves were still singing from the pain. And then slowly, the sensation morphed into a thick syrupy pleasure that moved through my veins as he began rubbing my clit soothingly, murmuring his approval and I remained still while he did.

It took everything out of me to do so.

He was masterful with his touch, not too hard and not too soft. He rubbed all the right places at the right times, driving my hunger higher. I could feel a shaking starting from the pit of my belly and spreading out to my limbs, but I held it back, biting my lips to do so.

“No sweetheart.” The voice of the first man, Minty-Leather, crooned. His hand left my nipple, traveling up to my lips. “Don’t bite them. Here, you can bite mine instead.”

And suddenly soft lips were on mine and his minty breath was in my mouth.

His tongue coaxed and danced with mine so sensuously, I couldn’t even be awkward like I usually was. All I had to do was follow his lead, and his hand went back to my nipples, plucking then twisting, adding that bite of pain that I craved.

I trembled, my legs shifting in my hunger, and I jerked as he spanked my pussy again. It was lighter this time, but no less intense. I screamed into his mouth as my clit stung. He continued caressing and my desire climbed to such an intensity every nerve in my body hurt. I wanted to cry.

And then it got even worse. A wet lick against the slit of my pussy, up to my clit.

I tore my mouth away from Minty-Leather, gasping in air. I couldn’t take it anymore. I was going to come.

And then with another spank and a lick across my clit, I exploded over his face.